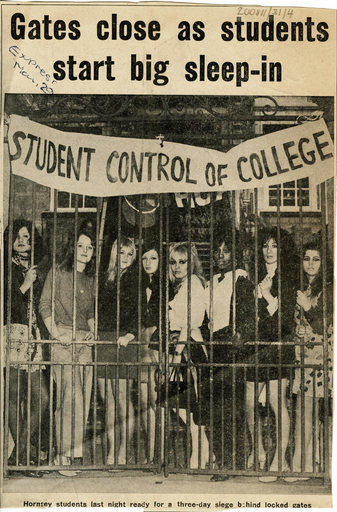 In May28 1968 students at Hornsey College of Art in North London – in a building now (1988) occupied by the TUC Education Centre – began a 24 hour work-in. The limited aims of the protest – for student control of student union funds – rapidly gave way to a deeper demand for thorough changes in the college regime and in art and design education. A dramatic shift of mood took place as students from the far flung outposts of the college came together across boundaries imposed by age, status, specialism and geography. A feeble attempt by the Vice Principal to re-establish his personal authority by threatening the assembled students resulted only in his eviction from the building. The startled students found themselves in occupation. The ancien regime fled. Twenty four hours seemed too little time to discuss everything.

Three strands of pedagogical thinking converged in the manifestos of the Hornsey College of Art students in May 1968. The first, partly derived from the reforming trends in progressive education, was nurtured by the movement for the common school. It argued for the elimination of GCE entrance qualifications and rejected examinations in art history and general studies. The egalitarian foundation of this idea was based upon a common experience of art and design students that their secondary education prepared them poorly for a higher education in the visual arts – that methods of assessment derived from the stratified structure of formal academic education were inappropriate and that entry should be open.

The second derived from a diffused idea that art and design constituted a discrete activity within higher education and could legitimately be considered separately from academic or technical and scientific studies by virtue of the special character of art.

The third constituted design, a specific activity and discipline distinct from fine art, admitted the historical continuities but took the machine and the built environment as a starting point for a celebration of a new rationality. This trend borrowed rather uncritically from emergent de-schooling trends, psycho-analytic theory, critiques of consumer culture, trans-atlantic notions of network learning and cybernetics.

These concepts were in daily contradiction with the art school regime and with the dominant trend among the rapidly expanding corps of art educationalists and art school administrators who were wedded to a rather narrow vocationalism.

The distinction between the two kinds of student. was maintained physically – in Hornsey they studied in different buildings – and by quite different curricula. Generally speaking, vocational students were draw more from the locality, were less likely to be from well-off middle class families, were expected to eventual fill lower and intermediate positions in the expanding design world and followed a course whose narrow vocationalism was mitigated by a token nod in the direction of general studies.

By way of contrast Dip A D students were supposed to be degree equivalent. They received a mandatory grant – the most significant mark of academic respectability – but few were convinced that art and design education was comparable to university studies. Many students and almost all the administrators thought of degree equivalence as the key to comparability – in career advancement, in salary advancement, in salary levels and promotion prospects.

Two powerful currents fought out a subterranean battle in art schools. One held to the traditional centrality of fine art studies with vestiges of the atelier system enshrined in the peculiar status accorded painting and sculpture students and teachers. Hornsey prided itself on the large number of established or up-and-coming names who taught part-time. Drawn mostly from abstract expressionist and non-figurative trends they played an important part in the marketing of Hornsey as a prestige institution.

However, fine art studies played a declining and subordinate role in the life of the college. Painting and sculpture students were based at the Alexandra Palace building, they laboured in a shanty town of individually constructed work spaces in a huge hanger like hall. Some even constructed roofs to their work wombs, others preferred to work at home. As a metaphor for the dominant thinking among fine art student this peculiar perversion of the People’s Palace into an Arndale Centre of individualistic fine art boutiques is highly appropriate.

A second current placed design at the centre of curriculum. In part this was a mere reflection of the market lead pressures on the college to turn out a range of design specialists – in part it derived from the centrality accorded to basic design skills and visual research studies by the Modern Movement. Graphic design studies were based at a scruffy Civil Defence building on the North Circular Road. Graphics was run by administrators of staggering mediocrity but taught by part-time lecturers with one foot in the real world of commodity fetishism. To a greater or lesser extent the professional ideologies of fashion and industrial design dominated the design departments at Hornsey. There existed a striking discontinuity between the fashionable image of the college and the poverty of its buildings.

It has become conventional to attribute the Hornsey occupation, the Guilford strike which rapidly followed, the outbreak of similar manifestations throughout much of the art school world as somehow connected with the May and June events in France. Undoubtedly there was a resonance. But it would be misleading to suggest that these developments were in some essential sense spontaneous. They were characterized by a certain spontaneity – as is all mass action – as is all protest and revolt. But as with all social movements, the qualitative leap into dynamic action was preceded by, conditioned by, a slow accretion of signs – secret and public – that change was needed. In the case of Hornsey, the May 28 revolt was paradoxically and in part the product of an alliance between students, staff and the principal. He was a curious blend of petty minded ambition, obsessive bureaucrat and quite striking imagination. Self-promotion was fused with a sense of historical moment into a formidable drive for resources and publicity for Hornsey.

In 1967 his plans were threatened by a plan to incorporate Hornsey into a new polytechnic to be formed by amalgamation with Hendon and Enfield colleges of technology. Quite correctly, he and the corps of senior administrators, saw the Polytechnic Plan as a threat to their position. Enfield, in particular was run by a pair of high powered academic sharks, public advocates of polytechnic education, and well connected politically. The Hornsey incompetents would have been eaten alive.

Students and staff had other worries. Real concerns, about job security, status within the institution for art and design studies, and the future of art and design education as a discrete discipline were mixed up with daft Utopian ideas about the uniqueness of art education and the supposedly special character of art students as bearers of universal values in a machine age. An uneasy alliance came into being. The student union – which had gradually acquired a more politically experienced leadership and established contacts with the NUS and other London art colleges – organised a series of departmental meetings and demonstrations at the Wood Green civic centre to protest against the Polytechnic Plan. The principal and senior staff gave silent sanction to the protests. Theory and arguments were provided by a group of younger teachers; designers and general studies tutors in the main.

The campaign never stood a chance of success in the long term. However, it created a new atmosphere in the college. Cross departmental links were made, the experience of mass action generated new interest in the student union and strengthened membership of the teachers association. Delegations from Hornsey attended the annual NUS conferences and the newly instituted art colleges conference. The pressure for student participation in the college government began to be felt at departmental level and raised expectations among junior and part time staff that they too might gain access to power. A college chapter of the Radical Students Alliance was formed and its banner began to appear at anti-apartheid and Vietnam solidarity rallies. An art student candidate stood in the local elections to publicise the case for the college’s independence. A £100 (four times a policeman’s wage in 1967) was collected from students by the Young Communist League to buy a motorbike for the Viet Cong.

The case for student participation had been hammered out in a series of policy statements between the NUS and various associations of educationalists and local authorities. But these weighty documents had little effect on the college regime or the Conservative worthies on Haringey Council. The college continued to be run by diktat and informal committee. The Bursar and Vice Principal unilaterally ended the convention whereby the student union president was granted a year’s sabbatical and paid from the student union funds. By vetoing the president’s sabbatical the college authorities created a conflict over the issue of student union autonomy at precisely the moment when students wanted to play a more active part in running the college. Consequently, pressures which had been diffused at departmental level became focussed on this single question.

The rupture in conventional college life came about over the issue of student union autonomy but behind this lay more substantial issues. A constant thread in discussion throughout the Polytechnic Plan campaign -and a big part of the broader education debates led by teachers unions and the NUS was the issue of the binary system in higher education. Criticism was focused on the Polytechnic Plan precisely because it seemed to further institutionalise the disparity in resources and status which existed between universities and public sector colleges. Buried within this discussion were echoes of the controversies over comprehensive secondary education. It seemed as if a high proportion of Hornsey students came from outside London and from working classes and lower middle class backgrounds. A rather diffused sense of deprivation fused with more local and departmental concerns to produce a general demand for change.

Recovering the rather prosaic foundations of the Hornsey revolt from the spontaneist myths of ‘68 should not obscure the extraordinary boldness and imagination of the students and staff. The foundation of their discontent lay in the failure of the art and design education system to reconcile the contradictory pressures for vocational training and increased specialisation with the need for a broad education. Their demands were broadly democratic in character, their tactics strikingly original, their reserves of courage and organisational ability constantly surprising. As innocents they made the classic mistake of substituting dreams for reality, elevating the tactic of occupation to a principle and believing that an agreement with a more powerful adversary would hold. As a consequence they were defeated. But it is the victors who are forgotten.

Nick Wright went to Hornsey College of Art in 1965 to study graphic design and typography. He became Secretary of the HCA Student Union in 1966 and President in 1967. In 1969 following the student occupation of the college the authorities obtained a High Court injunction preventing him from entering the premises. Fifteen years later he returned to Middlesex Polytechnic and completed his degree before taking an MA in Art History at Sussex University.