From 1910 to 1917 peasants and proletarians overthrew the Diaz dictatorship which had oppressed a 90 per cent landless, largely illiterate peasantry in Mexico.

The liberal Alvaro Obregon soon betrayed the revolution by masking a return to capitalist oppression beneath a populist, nationalistic rhetoric which was propagated by a vast cultural programme to recast Mexican history.

To this end in 1920 the government commissioned major public murals from aesthetically progressive artists including Diego Rivera, David Siqueiros and Jose Orozco.

But when these artists’ murals conveyed the revolution’s socialist ideals the government withdrew its support. In 1922 the three co-founded the Artists’ Union which was committed to a socially progressive, public art to promote political change.

The communist Siqueiros dedicated his manifesto for the Artists’ Union to “the native races humiliated for centuries.” He welcomed African-influenced modernist art but argued that, unlike the European modernists, Mexicans could draw upon their own pre-Colombian visual languages and folk art to combat the domination of European academicism.

To combat the curtailment of the mural programme, the union harnessed the living visual tradition of popular broadsheets such as Jose Posada’s to continue spreading progressive ideas cheaply.

In 1924 it founded the communist newspaper El Machete, which included inserts of large red and black woodcuts by its founder members. This was truly a people’s art. On the paper’s mast head were the words: “The machete is used to cut cane … And to bring low the arrogance of the impious rich.”

That Tina Modotti’s photograph Workers Reading El Machete features the newspaper is no coincidence. A Communist, Modotti used her camera as a tool for social change, observing and celebrating the lives and hopes of ordinary indigenous working people. 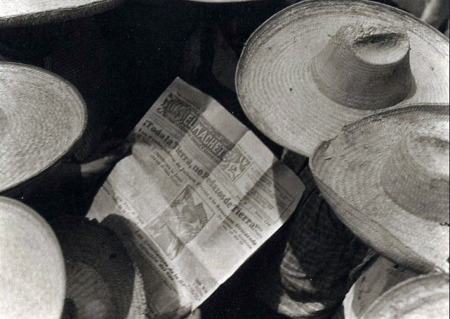 Like the painters, she did so in a modernist style. Seen from above the sombreros’ circular shapes surrounding the central rectangle of the newspaper form a simple geometric composition, enhanced by the sharp tonal contrast cast by the hot sunshine.

Yet unlike the formalist photographs by Edward Weston among which it is hung in this exhibition, Modotti’s photograph is rooted in respect for and knowledge of the peoples’s lives. When illiteracy stood at over 80 per cent so that papers were commonly read out loud, the photograph celebrates the literacy and political awareness of one or more of these workers.

Rivera had signed the Artist Union’s manifesto. His large painting Dance At Tehuantepec of 1928 combines European modernism with the decorative elegance and exuberance of Mexican folk art.

Its symmetrical composition, precise shapes and vibrant clarity of colour echoes the dance’s formality and restrained passion. The dancers’ relaxed arms, erect spines and proud necks contrast with the fluidity of their lower bodies and fast footwork.

Subtle touches of varied colours such as the pale greens, lilacs and oranges which enliven the cream outfits make the painting shimmer with movement and light. The painting celebrates the beauty of the dancer’s non-European physiognomies and its message is clear – these peasants may be barefoot and impoverished but centuries of oppression have not crushed their sophisticated, cultural traditions.

Unfortunately the exhibition’s curator proposes an alternative narrative so that almost none of the above socialist intentions and achievements are explained in the accompanying leaflet, captions or large text panels.

The political revolution is framed as a negative force causing “instability,” misery and upheaval whose saving grace was an aesthetic “revolution” which created a nationalist art. The exhibition reminds us that artists such as Rufino Tamayo opposed “social realism” in favour of a “universal language” which nevertheless remained “deeply patriotic.”

It argues in conclusion that a bonus for this renaissance were the many foreign artists and intellectuals that it attracted to Mexico.

The latter would have made an interesting topic as part of a large exhibition but in the Academy’s small Sacker Gallery they almost outnumber works by Mexican artists and some such as Josef Albers’s abstractions could just as well have been painted elsewhere.

The extensive mural programme is barely mentioned and not a single photograph or preparatory drawing from it is included. There is only one unrepresentative print from the wonderful Taller de Grafica printmaking collective’s extensive output.

Mexican nationalism is understood like that of a capitalist nation state, whereas the dominant socialist artists’ stated intention was to liberate Mexico’s ethnic peoples from their continuing oppression by the bourgeois ancestors of Spanish colonialists.

It is indeed important to present a balanced account of the multilayered Mexican art scene but this exhibition so minimises and denigrates the socialists’ contribution that it distorts art history.

Surely socially committed art was the most influential and truly revolutionary contribution to Mexican art and the major reason for the foreigners such as the Italian-American Modotti to flock there ?

There are some excellent paintings and photographs to be seen but the exhibition’s sanitised, revisionist version of Mexican revolutionary art is a missed opportunity.

Mexico: A Revolution In Art

One thought on “Mexico: A Revolution In Art”