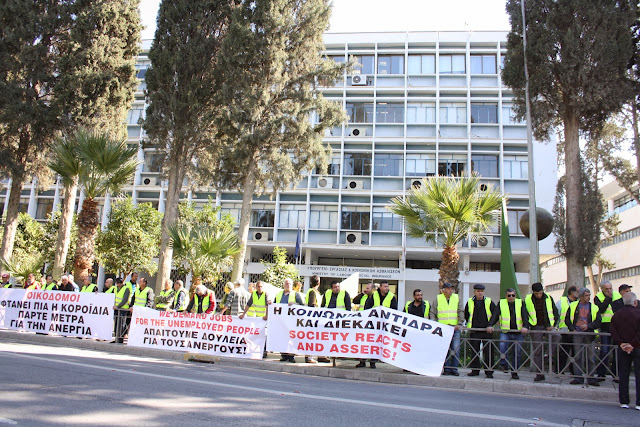 Thousands of workers, farmers, pensioners, workers in the public sector, teachers, pupils, students and others took part in the symbolic encirclement of the Ministry of Finance and Labour, the “House of Europe” and the Cooperative Central Bank at the same time when the Anastasiades government and the delegation of the Troika were locked in talks  inside the Ministries formulating the new updated Memorandum…The united response of broad sections of the working people express the demand for another course and path, far from the suffocating policies of the Troika and Brussels. The brutal and on-going cuts and attacks on workers rights and gains are taking place on all fronts. This mass movement believes, despite its different class and political orientations, that the path of the Memorandum and the Troika is a dead-end path and that as long as Cyprus is proceeding on this course the more it will be plunged into even greater deadlocks and problems, as is the case of the other countries under a Memorandum. 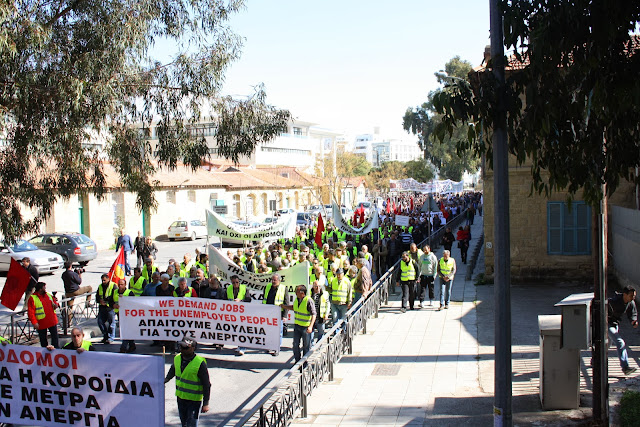 Our class based trade union organisation PEO is playing a pioneering role in forging class unity and joint action, and as always, leading by example, is in the front line of all the daily “small” and big struggles.

Attached you will find some characteristic photographs from the mass mobilisation, as well as the Resolution agreed by more than 20 trade union and social organisations that have signed it. Best regards, 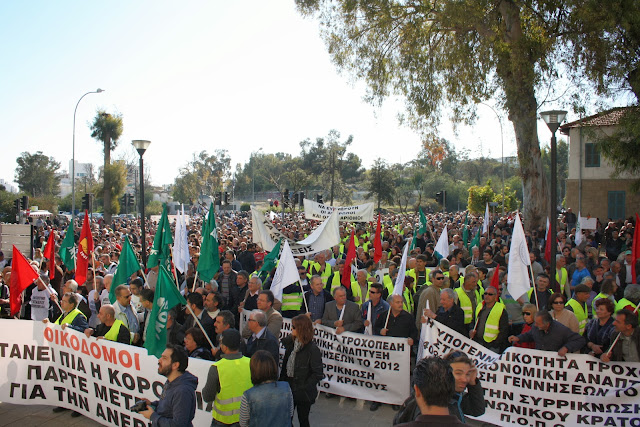 Resolution adopted by the participants in the social mobilisation organized on the 8th of February 2014.

We are all suffering from the harsh austerity that has been imposed through the Memorandum, as well as the lack of timely and effective social consultation, resulting in the curtailment of trade union and social gains to a dangerous extent; gains which have been won through struggle and sacrifices over many decades. The tragic consequences of the implementation of the Cypriot Memorandum are not only continuing to cause suffering to our people, but are exacerbating their position daily with very bleak prospects for the future.

Unemployment is rampant with one in two young people out of work, while the long-term unemployed are increasing at a dramatic rate.

Pensioners are suffering from the shrinking of their incomes, vulnerable social groups such as large families, the disabled, single parents, students, school pupils are directly threatened with poverty. The welfare state of Cyprus is gradually being dismantled on the pretext of fulfilling fiscal targets.

The economy continues to decline and is being destroyed given that 2014 is expected to be worse than 2013. Shopkeepers, small manufacturers and professional groups, are in dire straits, while farmers are increasingly unable to continue cultivating the land.

Public Education is under constant attack, which undermines the education provided, threatening the future of the young generation.

Public Health because of the on-going cuts, is finding it increasingly difficult to fulfil its role towards Cypriot citizens, even to those groups of the population on the lowest incomes.

Precarious and non-serviceable loans are continuously rising since thousands of people cannot pay their instalments and are faced with the possibility of becoming homeless.

Those guilty and to blame through their corruption have led the country to economic tragedy and are unpunished and undisturbed.

Our new mobilisation aims to highlight once again our reaction and resistance to the tough and brutal austerity policies that are being imposed on Cypriot society and the deadlocks created by the recession, unemployment and poverty that are being reproduced in a vicious circle.

We reject the steady dismantling of the welfare state and unfair distribution of burdens and costs of the economic crisis.

We reject the selling-off of public wealth through processes which not only do not serve the social demand for a true modernization of the Semi-state organisations, but lead to privatizations reminiscent of a sell-out , with tragic consequences for the Cypriot consumer.

We are asserting a policy for growth and development with the active contribution of the state and the wider public sector in order to create conditions for recovery and jobs for the unemployed.

We assert European solidarity and a Europe of the peoples, not a Europe of statistical figures and economic indicators.

We denounce the Troika’s policies, which are being imposed forcibly and disregard the devastating economic and social impact on workers and societies.

It is our belief that the full alignment with the Troika’s demands and the exploitation of its presence for the adoption and implementation of dogmatic and cruel policies does not lead our country on a course of progress and recovery, but creates conditions for the sharpening of contradictions and the reproduction of dead-end policies.

As long as these policies continue, resulting in the working people and vulnerable groups of the population suffering, society will react and will assert a qualitative standard of life worthy of its people.

Pancyprian Union of Consumers and Quality of Life