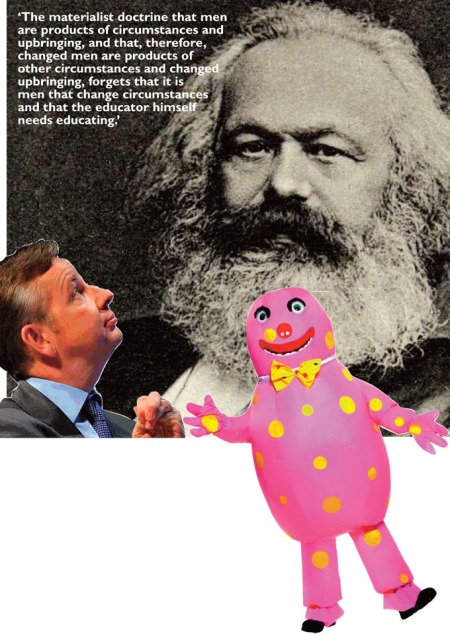 What a day today has been. In three days I retire as editor of the education professionals’ magazine Improvement delighted in the knowledge that Gove has gone from office.

Teachers already at work and parents on the school run felt a frisson of delight as news emerged that Michael Gove had been sacked as education secretary.

When NUT secretary Christine Blower said today that Gove had forfeited the trust of the teaching profession she understated the issue. Criticism of Gove’s polices has gone far beyond the the circles of education professionals and parents to include local government figures of every party and members of the Commons education select committee irrespective of party affiliation.

But Gove, despite a studied politeness, has provoked a deep personal antipathy as he pursued a policy agenda that in its adherence to market mythology and almost atavistic reactionary theories offended almost every one who thinks and cares deeply about the ways in which we raise our children.

The exceptions include the constellation of millionaire-funded right wing think tanks that provide a veneer of intellectual justification for government policies. Gove has managed even to antagonise a figure as reactionary and discredited as his Lib Dem understrapper David Laws whilst finding fault even with Ofsted under its chief inspector Michael Wilshaw.

As every probationer teacher knows, while you may be alone with a classroom full of children the progress of each pupil and the success of a school and of the education system as a whole is a collective effort in which progressive educational theory and practice, effective teacher training, well-funded and well-organised schools, strong local networks, careful inspection regimes and well-grounded government policies can work to produce a harmonious whole.

Gove has managed to breach what has been a remarkably wide-ranging consensus over core educational values that goes back to the last century when even Conservative governments understood that Britain’s economy and culture demanded a population educated for the modern world.

Post war Britain half-built a welfare state that coexisted with class privilege – no more deeply entrenched than in the education system – where there existed, and still does, a private sector that educates an elite for management and government.

But a powerful alliance of the labour movement and progressive middle class opinion, underpinned by progressive child development theories, educational psychology and pedagogy – drawing deeply on pioneering Soviet pedagogy – helped to transform the rigid and highly selective school system into something half fit for the twentieth century.

Of course, deep rooted elements of selection persisted, some Tory governed local authorities retained the eleven plus and grammar schools, but a broad movement for the common school and the raising of the school leaving age opened up education, and higher education, for a wider strata of working class and middle class children and most especially girls.

It is worth remembering that Margaret Thatcher’s government ended grammar school status for more schools than any other government.

The bedrock of progress has always been local government where a measure of democratic accountability and effective teacher trade unionism was allied to more far sighted and rational trends, most deeply entrenched in Labour but with a substantial cross party support.

If all politics is essentially local, education politics is most deeply felt at local level. Survey after survey shows that the great majority of parents want a good local school for their children.

But in the past two decades one government after another has introduced policies which have worked against the democratic principle of the common school for all our children.

Firstly, selective schools have continued to exist in some places. In others more hidden forms of selection have persisted and even intensified with some schools, including faith schools becoming citadels of selection.

Michael Gove’s personal contribution has been to further fragment the school system. Each measure; academies building on the pernicious heritage of New Labour and the turncoat Adonis, so-called ‘free schools’ giving every right wing crank, religious nut and gung ho individualist the right to open a school without reference to local needs or good planning plus whim-of-the-moment curriculum changes has been deeply unsettling to people working in the school system

Of course, the overarching theme is always the imposition of ‘free market’ dogmas dressed up in notions of individual choice and initiative but invariably having the effect of further stratifying the school system to the advantage of those classes and strata who desire above all a measure of social exclusivity, a privileged education for their children and a barrier to their descent into a system that is increasingly underfunded and ever more differentiated. Selection by market mechanism.

Central to the Gove strategy has been an assault on local government so wide ranging in its disruptive effect that it has united Tory and Lib Dem councillors in criticism of their government’s polices.

Along with this has marched an ideological offensive that returns, like dog to its vomit, to deeply discredited ideas that seek to reinvent the flawed and faked ‘facts’ that originally underpinned the rigid class based social selection of the pre comprehensive era.

Central to this mindset is the idea that social position in some way reflects innate abilities. Dressed up in a thousand guises and tricked out with fancy theories and half digested facts from US experience reactionary education policies are always rooted in a sense that education is about the differentiation of children and the assertion of hierarchies of status and position.

Gove parodied child centred pedagogy to promote a formulaic approach to basic skills, literacy and numeracy. His government’s cuts to early years provision has weakened compensatory mechanisms for those vital early childhood stages when the foundations of social and intellectual development are laid.

A series of curriculum initiatives attempted to reproduce a Boys Own world of imperial hegemony so out of step with contemporary reality as to united wide sections of opinion against its simplistic idiocies.

Faced with a solid wall of professional opinion Gove categorised the whole corpus of educational theory, underpinned by decades of theoretical and practical research and accepted as the foundation of learning across the globe as the ‘enemies of promise’.

For Gove the Blob was represented by the hundred leading academics and practitioners who wrote to the Independent criticising his policies.

They were “… academics who have helped run the university departments of education responsible for developing curricula and teacher training courses.

“The academics who criticised the coalition’s plans for education wrote with reference to Karl Marx. You would expect such people to value learning, revere knowledge and dedicate themselves  to fighting ignorance. Sadly, they seem more interested in valuing Marxism, revering jargon and fighting excellence.”

So blind is he to the diminishing credibility of market mechanisms in an era where his treasured transatlantic free market dogmas are so discredited that even City bankers read Karl Marx to understand their world that he thinks he can frighten the children with the spectre of communist ideas.

This is a man who has united thousands of teachers in anger, created a common front among education unions and informed opinion and alienated millions of parents.

And now even his best mate, David Cameron, has sacked him as a liability.

Even a Coalition cabinet so socially selective that even after this reshuffle its female members barely match in numbers Old Etonians has no room for Gove as education secretary.