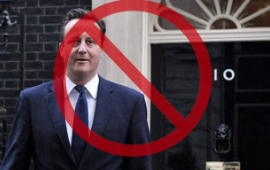 A mass movement against cuts and privatisation needs to be built to drive the Tories out of office as soon as possible, general secretary Robert Griffiths told the Communist Party executive committee at the weekend.

‘Why should millions of people have to suffer five full years of misery at the hands of a government which received the votes of only 24 per cent of the electorate’, he declared.

Robert Griffiths argued that bringing down a government in crisis is not an unrealistic prospect when ‘the economic recovery is fragile, unbalanced and driven by debt and inflated capital and property values’. In particular, he pointed to the British economy’s low levels of investment and productivity and high level of imports.

The executive committee urged trades unions to help ensure massive turnouts for the People’s Assembly and Scottish TUC demonstrations on June 20 in London and Glasgow against austerity.

The Communist party leader also predicted that Tory divisions over the EU would come to the fore as negotiations progressed and a referendum over Britain’s membership drew nearer.

However, Labour will only be able to take full advantage of these divisions if it has switched to supporting popular sovereignty and a referendum, and so is no longer alongside the Tory government, the City and big business in backing Britain’s membership of the monopoly capitalist and militarist EU’, Robert Griffiths remarked.

Britain’s Communists set themselves the strategic objective of building a coalition with other socialists, trade unionists and peace campaigners to project the ‘democratic, working class and internationalist case’ against EU membership in the referendum campaign.

The Communist Party executive also identified the need to strengthen the trade union, peace, women’s and tenants’ and movements to meet the challenges posed by the election of a Tory government.

On the future direction of the Labour Party, Mr Griffiths urged the trades unions to ‘fulfil their historic responsibility’ to reclaim it as a party that represents working class interests. If there is no significant sign of progress by next year’s Labour Party conference at the latest, he added, steps should be taken to ‘re-establish a mass party of labour’.

Welcoming the resignation of Jim Murphy as Scottish Labour leader, he urged the labour movement to come out clearly in favour of a federal Britain, based on the devolved national legislatures and – where the demand exists – directly elected regional assemblies in England.

But the Communist Party leadership warned that ‘fiscal autonomy’ for Scotland could be a trap to devolve responsibility for imposing austerity to Edinburgh, when an extensive redistribution of wealth across the nations and regions of Britain is needed instead.

The Communist Party  executive also congratulated its nine parliamentary candidates on fighting the most vigorous campaign since the Communist Party’s re-establishment in 1988, and noted that local government candidates in Manchester and Devon had won up to 11 per cent of the poll.