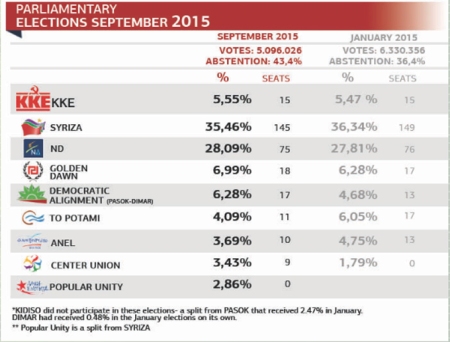 The KKE will utilize its forces for the regroupment of the movement, for the people’s alliance

Statement of the general secretary of the KKE, Dimitris Koutsoumpas

According to the final results, the KKE received 5.55% of the votes.

Dimitris Koutsoumpas: “The KKE salutes the hundreds of thousands of people who honoured it with their votes. All those men and women who ignored the extortion, the dilemmas, overcame hesitations and various reservations in order to join forces with the KKE.

The KKE will utilize its political, electoral and parliamentary strength to work for the comprehensive regroupment and strengthening of the labour-people’s movement, for the construction of a great social, people’s alliance.

The KKE, as always, will stand shoulder to shoulder with our people, consistently against any government that is ready to implement the barbaric memorandum.

The correlation of forces in parliament will in any case produce a coalition government. Its programmatic statements are already ready-the implementation of the 3rd memorandum.  Capital, its political and governmental personnel, together with the Troika, wants to win the people’s consent in order to implement the barbaric measures without resistance. They want a harmless, fake opposition so that its hands are free to wage the anti-people offensive.

The election results as a whole are negative for the workers, the employees, the urban and rural self-employed, the youth, the pensioners.

The KKE will consistently and continually struggle inside Parliament and inside the people’s movement in order to isolate the Nazi monstrosity, Golden Dawn.

There needs to be a stronger KKE everywhere, in the workplaces, in the places of education, the popular neighbourhoods, in the places where the heart of our struggling and sorely tested people truly beats.