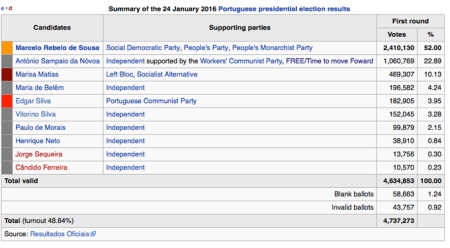 from the Portuguese Communist Party

On the results of the presidential elections of January 24, 2016

1. These elections confirmed the importance of the PCP having its own, autonomous voice during the debate on the role and powers of the President of the Republic. No other candidate stated with the same clarity the value of the Constitution of the Republic as an essential reference for a different course in the country’s political life, which can fully ensure the right of the Portuguese people and of the country to its development, to progress and social justice. The candidacy of Edgar Silva was unequivocally committed to the fullfilment and respect for the Constitution but also, as no other, to all its dimensions: political, economic, social and cultural. A unique and singular embodiment of the rights, the value of labour, the simultaneous expression of the various sectors in the mixed economy which it envisages, the assertion of national interests, sovereignty and independence.

The campaign of Edgar Silva gave voice to the rights and interests of the workers, pensioners,  small and medium businesspeople, farmers, fishermen. It reflected the problems of the youth and of women, of those who create culture, and it presented solutions corresponding to their aspirations. It embodied the most pressing issues of economic and social development, of national production, of job creation, fo the distribution of income.

2. The result obtained by Marcelo Rebelo de Sousa is inseparable from a careful and prolongued media construction, which was in fact prolongued even during election day itself, with the candidate blatantly seeking to conceal and dissimulate his real position regarding crucial issues on the role of the President of the Republic, as well as an ostensibly false assertion of an alleged independence, which is belied by what he in fact represents. As the PCP repeatedly underscored, Marcelo Rebelo de Sousa was not just the candidate of the PSD and CDS, but represented the continuation, with one or other adjustment of style, of what has characterized the mandates of [the outgoing President] Cavaco Silva.

The small margin of votes which has enabled him to avoid a second round in the elections proves the very real possibility which the PCP always proclaimed, regarding the existence of conditions to defeat him, if all others were truly committed to this goal.

The election of Marcelo Rebelo de Sousa as President of the Republic is, in the present stage of the country’s life, a negative factor that gives rise to legitimate concern regarding his future mandate. Regardless of repeated statements, Marcelo Rebelo de Sousa, both due to his views on the Constitution of the Republic and due to his right-wing and PSD history, does not guarantee a Presidency committed to the Constitutional principles and values. He is linked to the PSD and CDS, and to the projects which they harbour to perpetuate the policies of  economic decline and social regression, which have marked our political life during the past four years.

His repeated statements during the campaign, regarding the respect for the Constitutional duties of the President of the Republic, regarding his proclaimed independence vis-a-vis the Party to which he belongs and which supported him, or regarding his attitude towards other organs of sovereingty and the regular functioning of the institutions will, with the responsibilities that he will now be invested with, prove the real political and institutional stance of Marcelo Rebelo de Sousa, and require actions in accordance.

3. The result obtained by the candidacy of Edgar Silva falls short of what the importance of his project required, both in terms of the goal of these elections – ensuring a President of the Republic that defended, respected and fulfilled the Constitution – and also for what it represents and reflects, in terms of a coherent and irreplaceable activity in the struggle of today and of tomorrow, for a different course for our national political life. A result that was obtained through hard work, in a context of an unequal media coverage, which promoted and favoured other candidates and made appeals to populist and anti-democratic sentiments.

The current of mobilization for Edgar Silva’s candidacy, the awareness which it raised regarding the country’s problems and the solutions and policies that are necessary to confront them, as well as the inestimable contribution which his campaign and the action of thousands of activists that took part in it gave, fighting against discouragement and instilling confidence in the construction of a better and fairer Portugal, will have an impact in the near future, as an essential factor for the development of the struggle and of the political battles which the new stage in the country’s life places before the workers, the people, democrats and patriots.

No other vote corresponds, as does a vote for Edgar Silva, to a solid commitment to a patriotic and left-wing policy. No other vote will weight, as will a vote for Edgar Silva, in the near future, for the activity and struggle of the workers and the people, in defense of their rights, to recover their income, and for a sovereign and independent assertion of our country.

A special word of greetings to comrade Edgar Silva, who embodied this demanding and important battle, with great capacity, commitment, conviction and dignity; to all those who voted for his candidacy; to the thousands of activists and supporters who built a campaign that had no parallel in any of the other candidacies of direct contact, mobilization and awareness-raising, regarding the country’s situation and the role required from a President of the Republic so that, respecting the Constitution, he may act to ensure a break with the course of national decline and social regression to which the country has been subjected.

4. I wish to reaffirm here, to the Portuguese workers and people, that they can count on the Portuguese Communist Party, with its activity, determination and struggle, in the current stage of the country’s life, as always, to defend, recover and achieve rights, to solve problems and respond to just aspirations, in what concerns wages and pensions, employment and the struggle against precariousness, for healthcare, education, social security and culture, to support everything positive that can be achieved and to fight against measures and decisions that are negative, to break with the right-wing policies, to refuse foreign impositions and ensure a patriotic and left-wing policy, democracy, national sovereignty and a Portugal with a future.