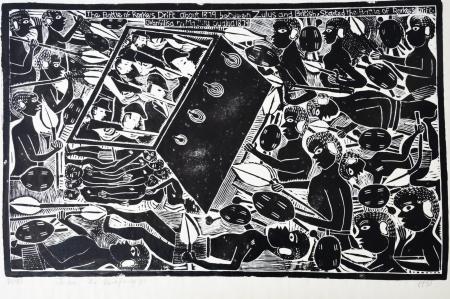 South Africa: The Art of a Nation

FILMGOERS of a certain age will remember the 1964 film Zulu, which shows a group of British soldiers holding out against the massed warrior formations of the Zulu nation.

A relatively minor 1879 episode in this country’s bloody colonial history, it originally gained its salience in the public mind because its exaggerated heroics served to deflect attention from the earlier devastating defeat inflicted upon the imperial army at Isandhlwana.

But each audience reads cultural products in distinct ways.

More than a century later, 20 years after the film was released and in the aftermath of the fighting at Broadwater Farm which saw the Metropolitan Police fought to a standstill, I watched as the youth of Tottenham — packed into the public gallery of Haringey town hall — answered the racist rhetoric of Tory councillors with an intimidating rendition of a Zulu battle chant which they can have only learned through an oppositional reading of that film.

It is against the colonialist narrative that in this exhibition John Muafangejo’s imposing linocut The Battle of Rorke’s Drift (above), created under apartheid in 1981, depicts the Zulu soldiers as powerful, imposing and decisive and, through this opposition, gains its power.

The apartheid rulers of South Africa were acutely conscious that the narrative they constructed around their contested presence in the country — that this was a land without a people — would be unsustainable if cultural artefacts revealed that other people has lived there for millennia.

Thus the recovery and exhibition of artefacts that illuminate the presence of South Africa’s first and subsequent inhabitants raises complex problems for anthropology and art history. We define “artworks” as art because they embody symbolic power, evoke emotions, command inquiry as to their origin and invite attribution.

The Zaamenkonst Panel, discovered in 1912, was later interpreted in rather prosaic terms within a narrowly representational art historical tradition.

But because the creators of these works, unlike those of more contemporary art, are unknown, problems of attribution and cultural identity inevitably arise.

Today, when the deployment of related disciplines — ethnography, linguistic theory and archaeology — is brought into play, these artworks may now be understood as possessing, for their creators, great spiritual power. It is now believed that hunter-gatherer rock paintings, rather than “art for art’s sake” are related to the “trance dancing” and “great healing” still practiced in the Kalahari.

When given greater force by the new post-apartheid political situation, such artworks acquire a fresh ideological significance. Thus, images from that pre-1900 Linton Panel, attributed to “San Bushman” though its creator(s) are unknown, have been incorporated into the South African state’s coat of arms signifying, in the official narrative, the common humanity and heritage of South Africans.

South Africa House in Trafalgar Square is decorated by a series of panels by landscape painter Jacob Hendrik Pierneef (1986-1957) (above) and the extent to which these, and the paintings and prints which under apartheid gained a wide currency, were consciously created to sustain the Afrikaner version of terra nullus — no-one’s land — is contested.

But the regime saw in his idealised and homogenised landscapes, empty of human beings, a version of their own legend in which this land was legitimately theirs.

This exhibition, and the exemplary book which accompanies it, raise interesting questions about the ways in which we understand cultural products.

Is art a category that includes any form of symbolic expression or can it be understood only in terms in which art is appropriated in today’s market economy? The Daily Telegraph, predictably perhaps, discusses the exhibition in term of the prices the artefacts fetch and bemoans the fact that “there is nothing by the darling of the South African art auctions, Irma Stern, or by Marlene Dumas, one of the most expensive living female artists.”

But art created in opposition to the apartheid system, encompassing both work created within contemporary painting and graphic genres as well as that mobilising indigenous techniques and motifs, resonates across cultural boundaries. 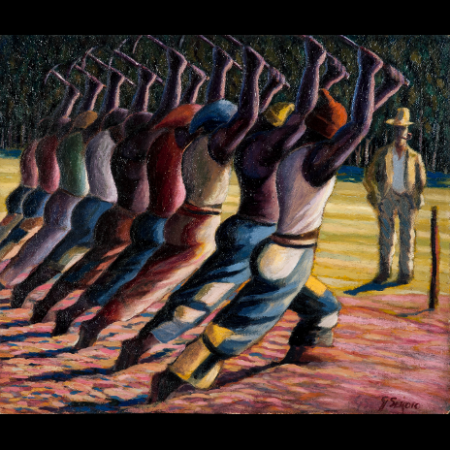 Gerard Sekoto’s 1946 painting Song of the Pick (above) was circulated in postcard versions as an expression of resistance, while Gavin Jantjes’s 1974 assembly: A South African Colouring Book draws on a graphic design context grounded in magazine design, collage and photography.

And a 1983 photograph by David Goldblatt, 9:00PM Going Home: Marabastad-Waterval Bus, with the explanatory caption: “For most of the people in this bus the cycle will start again tomorrow at between 2:00 and 3:00AM,” is a striking depiction of the human cost of apartheid policies.

Yet, however much that system imposed all kinds of breaches and fissures on people’s practical and spiritual lives, the cultural traditions of the populations who make up the nation continually found new expression.

In bringing together a vast array of images and artefacts drawn from South Africa’s pre-history, history and its contemporary situation this exhibition — free to those under 16 — is unashamedly political and ideological in its intentions and that is undoubtedly to be welcomed.

Nick Wright is editor of 21centurymanifesto. This review appears in the Morning Star newspaper, 26 November 2016

One thought on “South Africa: the art of a nation”