Today is the 40 anniversary of Spain’s Atocha Massacre. On 24 January 1977, a trade union office in Atocha Street, near to the Spanish capital’s main station, was attacked in a notorious act of neo fascist terrorism. 5 trade union lawyers were shot and killed and 4 others were seriously injured. The lawyers were members of the Workers’ Commissions (CCOO) and the then outlawed Spanish Communist Party (PCE). The attack was carried out by gunmen linked to the Fuerza Nueva far right party and was claimed by the Alianza Apostolica Anticomunista (AAA). The intended target of the attack was Joaquin Navarro, head of the CCOO’s transport section, who had led a strike to challenge the Francoist yellow union Sindicato Vertical. In 1990 it was revealed that an Italian fascist (linked to Operation Gladio, a clandestine NATO network) had also taken part in the attack. 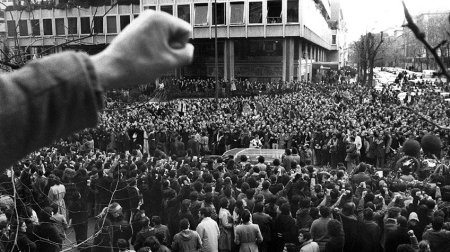 The Atocha Massacre is regarded as a watershed event in Spain’s transition to a democratic political system following Franco’s death in November 1975. Over 100,000 attended the funeral of the trade unionists and soon after both the PSOE (Socialist Party) and PCE were legalised. A commemorative sculpture – Monumento a Los Abogados de Atocha – is located in Atocha Stret outside of the Anton Martin Metro Station in Madrid and next month will be visited by a delegation of British trade unionists who, alongside the Madrid organisation of the CCOO, will pay their respects and mark the 40th anniversary of the massacre.

Thanks to Kevan Nelson for this

One thought on “The 1977 Atocha massacre remembered”