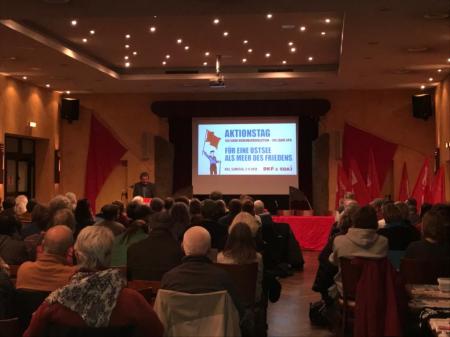 We, five Communist Parties from Poland, Sweden, Denmark, and Germany, set a sign for peace and international understanding with our participation in the conference “Baltic Sea – Sea of Peace”, to which also the Communist Parties from the Russian Federation and Finland contributed their texts. The Baltic Sea is a sea that has served trade and exchange between different nations since people have lived on the Baltic Sea. This sea must not be the scene of military aggression and exercises.

We condemn the NATO manoeuvres “Trident Juncture” – a few days ago in the North Sea, and “Northern Coast 2018”, which will soon take place in the Baltic Sea. The non-NATO countries Sweden and Finland are to be gradually introduced to NATO through their involvement in military exercises. We show solidarity with the struggle of the Communist Parties of Sweden and Finland, and with the peace movement of these countries against NATO membership.

These naval exercises are in line with the eastward expansion of NATO into the Baltic states and most of Eastern Europe, which has been taking place for years. The Russian Federation, whose military budget accounts for only about one seventeenth of the arms budget of the NATO states, is the enemy, no matter with which social system. It is to be put under pressure, and pushed into a new arms race. The threat is real for this country, which, as part of the USSR from 1941 to 1945, bore most of the burden of repulsing fascism, and to which the peoples of Europe have owed their freedom from fascism.

The European Union participates in the preparations for war by agreeing in 2017 on “Permanent Structured Cooperation” (PESCO), to which 25 of the 28 EU member states, including all EU Baltic Sea states except Denmark, belong, and which serves the European Union’s capability of military intervention.

NATO and EU aggression goes hand in hand with the elimination of potential resistance in neighbouring countries of the Russian Federation, where Communist parties are banned or are to be banned. We condemn nationalism and a new fascism, and every rewriting of the history of socialism!

As communist parties from countries bordering the Baltic Sea, we call:

– Stop the aggression against the Russian Federation!

– Stopping NATO maneuvres in the Baltic Sea – for a Baltic Sea of peace!

– Restoration of the political rights of Communists in Poland, Ukraine and the Baltic States!

One thought on ““Baltic Sea – Sea of Peace” Conference”