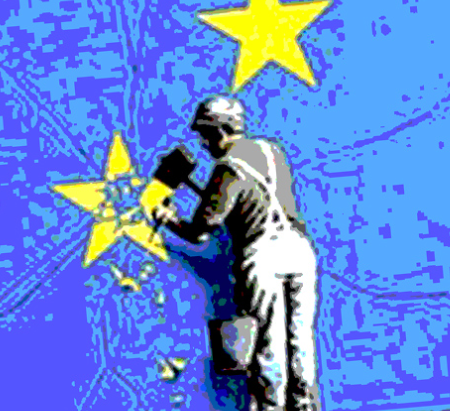 Theresa May entered the referendum campaign totally committed to Britain remaining in the European Union.

She was then, and is now a politician who puts the corporate interests of big business (into whose top ranks she is wedded) above the desires and needs of working people.

Big business, the banks, almost all of the City – save a minority of hedge fund speculators — the top civil service, military, intelligence and Foreign Office bigwigs, the liberal press and broadcast media have bent their backs to find a way to subvert the most decisive vote of the British people since Labour won the post war election.

Conscious that the critical element in the Brexit majority was a working class constituency that saw membership of the EU as emblematic of the indignities heaped upon it during decades of Tory, New Labour and Lib Dem government she has worked, with some skill, to salami-slice the Tory Brexiteers into impotency knowing that their fate was of little concern to the working class.

With May’s manoeuvre the divisions inside the ruling class are potentially resolved in favour of the dominant section, most closely tied to the US and thus keen to maintain the collective interests of transatlantic capital in the EU.

Rees-Mogg’s futile letter of no confidence in May’s leadership is a sign of his tendency’s declining power and a sign that May could win a confidence vote in the parliamentary Conservative party. Meanwhile Labour’s attack is blunted by the Blairite wing of the parliamentary Labour Party as it utters soothing noises in her ear.

Theresa May’s deal is not designed to attract a parliamentary majority. Rather it is designed to create an impassein which a new majority can be constructed against a ‘no deal’ Brexit and persuaded to tolerate remaining in the EU as the least worse case.

If her government survives the deal — whether it is accepted or not — could precede a long transition period in which Britain remains completely bound up with the EU and key elements of Labour’s alternative programme — most especially state aid to revive industry and employment — is proscribed.

The key question at this political moment – what Gramscians might call the conjuncture – is, will this working class constituency act in its own interests, or will it be marginalised, rendered silent and impotent.

The direction that Labour’s leadership takes is critical. Two things stabilised working class opinion at the early stages of the post-Brexit vote. Firstly, Jeremy Corbyn’s pledge to respect the vote laid the ground for the continuing revival of Labour’s electoral appeal. Secondly, the Labour focus on class issues — including measures that would impede employers using low pay to drive down the wages of sectors in which migrant labour was significant — helped reduce the toxicity of the migration issue.

It is significant that liberal opinion, whether in the poisonous form of Guardian and BBC journalism or as the deluded deliberations of ‘left-wing remainers,’ is most implacably opposed to the stand taken by the Labour leadership on these issues.

The sight of people who once marched against the Iraq war marching in lock step with Tony Blair, Alistair Campbell, George Osbourne and David Cameron shows just how deeply embedded liberal ideas are in sections of the left.

What we might call the ‘liberal’ wing of the Labour Right has made a second referendum its cause while the equally liberal wing of the left argues for a ‘free’ movement of labour as if this was an inalienable human right divorced from the free movement of capital, the concrete realities of the EU’s capitalist labour market and actual power of employers. The racist reality of the EU’s policy of targeted drownings in the Mediterranean is excluded from this picture of EU freedoms.

The great EP Thompson put the class question best when, in a piece penned at the time of the 1975 referendum concocted to endorse the country’s membership of the Common Market (into which we were taken without a vote) he wrote:

“the Market defines the diversity of European cultures as its crassest level as a group of fat, rich nations feeding each other goodies. Fourth, it defines this introversial white bourgeois nationalism as ‘internationalism’.

“It will not, of course, work. But the spoof about internationalism remains offensive. And dangerous. For when an altruistic glint gets into the bourgeois eye one can be sure that someone is about the catch it. Once replete, the eurostomach will want to euronate. The present idea is to do it on the British working class. ‘Going into Europe’ will mean ‘rationalisation’, ‘winds of competition’, getting rid of ‘restrictive practices’ (i.e. humane safeguards and self-protection), ‘facing up to things’. We can be sure that the things faced up to will be very different through the open shutter of the Dordogne and a bedroom window in Bolton.” (Writing by Candlelight’ (London: Merlin Press, 1980)

With remarkable prescience, he went on to argue that:

“Some sillies in the labour movements suppose the Market will facilitate socialist and trade union activity. It will do the opposite. It will put the bourgeoisie twenty years ahead at one throw. Luigi and Kurt and George and Gaston, with their secretaries, their linguistic skills, their massed telephones, their expense-account weekends, their inter-locking euro-directorships, their manipulation of the rules and of the Brussels spouters, will always be smiling at the table, with the agenda cooked, the day before the workers get there.”

Where Thompson missed a trick was in spotting that — clinging to the safety blanket of the Social Chapter – some trade union leaders would abandon the movement’s clear opposition to Common Market membership and open the door to imposed limits on public expenditure, PFI, privatisation and European Court of Justice judgements which undermine union rights.

Four decades and more have gone by in which the labour movement has allowed the ruling class to locate some of the institutions of class power beyond the reach of workers. Brexit threatens to repatriate some of these to within our grasp.

The next stage will test the Labour leadership. Most of the intransigent Remain right-wing in the PLP will be careful not to over-expose themselves before an election for fear that they would be deselected double quick if their votes propped up a Tory government. Even so, some calculate the risks of doing so.

3 thoughts on “Is a 21st century National Government of class collaboration taking shape?”