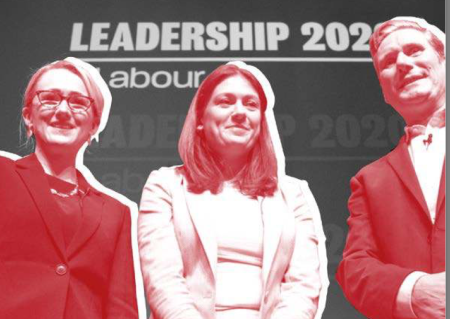 The confidence of Labour’s 2017 election campaign has dissipated instead of becoming a springboard for a further assault on a divided ruling class, writes NICK WRIGHT in the Morning Star

Nothing reveals the many fissures in the Labour family more than defeat. Except, perhaps, the popular victory of a left-winger who might represent a real threat to Establishment values and the bipartisan politics of late imperialism.

As we contemplate the careful positioning and subliminal messaging which lies behind the rather confected appearance of amity — always a necessary feature of politics in the age of mass media — between the present candidates for Labour leadership it is worth remembering how all this came about.

Corbyn’s election as leader three years ago was followed by a sustained campaign of sabotage by elements, not just in the parliamentary party but in the party apparatus, which placed his removal as party leader higher up their list of priorities than opposing the Tories in parliament or aiding the mass movement against austerity.

For many MPs, removing Corbyn’ leadership became more important than winning an election while others appeared indifferent to the prospect of defeat if it was to be the consequence of their campaign. For some it was an active ingredient in their strategy and tactics.

Both Keir Starmer and Lisa Nandy were active in this process. Isolated in the Westminster bubble the idea of chairing Owen Smith’s leadership challenge must have seemed like a good idea to Lisa Nandy. It has some utility today as she manoeuvres to attract such right-wing support as is not irredeemably committed to Kier Starmer. A measure of Starmer’s character is that he waited for the scale of the parliamentary revolt against Corbyn to be revealed before he followed suit and resigned his Shadow Cabinet responsibilities.

The long process that Labour has adopted for the selection of its leaders allows the issues at stake to become clearer as the real policy differences, and differences of political style, become more apparent.

The alliance of disparate elements that Corbyn’s election brought about has ended and the wide legitimacy that Labour’s radical programme commanded is now challenged by people who attribute the election defeat to ‘socialist policies’ which must be abandoned. This sotto voce message exists alongside an obviously mendacious wafer-thin commitment to retain the core elements of Corbynism.

We see this in the way in which the media structuring of Labour’s leadership battle has created a narrative in which the candidate most likely to find acceptance in ruling circles and its compliant media will, if not elected with a clear majority, almost certainly benefit from a harvest of second preference votes.

This is the product of a multi-faceted campaign that has dissipated the energy and confidence that suffused Labour’s 2017 election campaign. Recollect that Labour’s prospects, wounded by the assaults on Corbyn’s leadership, were poor. But a surge in popular participation, an effective social media operation, skilled targeting of swing seats and a bold manifesto (along with the divisions in the Tory ranks and a weakened Liberal Democrat Party) produced a surge in support that eroded a twenty point Tory lead and took Corbyn within a few thousand votes of Number ten.

John McDonnell said at the time that with another week of campaigning Labour would have won.

Instead of becoming a springboard for a further assault on a divided ruling class — this itself apparent in a highly conflicted Tory party in government — this hopeful prospect was dissipated as Labour’s activists and mass base was sidelined by a parliamentary party intent on subverting the clear decision to respect the referendum result.

The entire second referendum campaign and the People’s Vote campaign was a cynical exercise by a big business-funded and media sanctioned elite that depended for its political effect on excluding from the public debate the inescapable truth that there was never a parliamentary majority to give effect to these demands.

This created the space for Johnson to effect a partial purge of the Tory Remain tendency and terrify the residue into compliance with his strategy of an election campaign round the slogan Get Britain Done. With Labour corralled into an increasingly Get Brexit Undone policy the way was open for Labour’s manifesto to be driven to the margins of public discussion. The Tories upped their social media campaign with an avalanche of cash and draped their bare-bones manifesto in a democratic cloak of fidelity to the referendum result.

If there persists a multilayered majority for Brexit the People’s Vote campaign had a real mass base. While it was an overwhelmingly middle-class phenomenon it had wide support among young people most especially those in higher education.

It possessed, still possesses, a fair measure of legitimacy grounded in the widespread view that much of the bourgeois Brexit campaign had been mobilised around a profoundly reactionary, often racist, rhetoric that conflated the issues of immigration, sovereignty and nationhood into a nativist ideology.

This both a problem for an internationalist left that understands the European Union as the projection of European capital’s power.

The success of the Remain camp in conflating “inter-nationalism” with a kind of shared European privilege to travel, study and work freely threatens to undermine the deeper internationalism that found an expression in the mass movement against neo-liberal trade deals, in the Stop the War movement, the anti-racist and solidarity action with refugees and migrant workers and the Palestine solidarity movement.

This political and social mix meant millions protested against imperialist war while there are very few people minded to march behind City grandees or the big business backers of the EU’s austerity agenda in defence of the neoliberal project. Yet the Remain cause did attract mass marches.

The Conservative Party is a sight more class conscious than the Labour Party and Boris Johnson was, by and large, able to win the contending tendencies in his party to subordinate their different interests in the over-arching goal of holding on to government.

Brexit is a fact and Britain is out of the political institutions of the European Union. The precise nature of Britain’s relationship with its continental neighbours, both those in the EU and those out, will suffuse parliamentary politics for the rest of this year. This is principally about what kind of trading relationships develop and not since 1923 when the first minority Labour government was elected on the basis of divisions in the ruling class over free trade and protectionism have these kinds of issues had very much purchase in Labour politics.

It is over these issues that there are real differences in the Tory ranks and now that their hold on the formal instruments of class power are secure for a parliamentary term these will be played out mostly beyond the reach of the popular movement.

Brexit reconfigures the ground on which domestic economic policies, social legislation and labour market rules are decided. The rather limited social protections that EU membership entailed — already curtailed by Treaty revisions and European Court of Justice rulings — have less purchase.

These questions are transparently now the business of a largely unmediated contest between entirely domestic protagonists. It is them and us. Tory government and labour movement. Ruling class and working class.

The left-right division in labour politics has always existed as the inevitable consequence of Britain’s actual colonial domination of much of the globe, the imperialist character of its capitalist system and the possibilities that thus arise for a compromise between the working-class movement and the boss class. The Labour right has always been bound into imperial defence, anti-communism and class collaboration.

The continuity between this tradition and its postwar expression as an enthusiasm for the European Union was put with characteristic directness by Ernest Bevin, transport workers leader and Foreign Secretary in the post-war Labour government who wrote in the TGWU Record, January 1938: “The great colonial powers of Europe should pool their colonial territories and link them up with a European Commonwealth, instead of being limited British, French, Dutch or Belgian concessions as is now the case. Such a European Commonwealth, established on an economic foundation, would give us greater security than we get by trying to maintain the old balance of power …”

Making sense of Labour’s divisions has led to some ingenious attempts to downplay the class essence of the competing approaches.

Jeremy Gilbert, Professor of Cultural and Political Theory at the University of East London has taken to the Guardian to argue that the leadership contest has revealed new contours in Labour’s ideological topography and that the only way for labour to win is to ditch ‘Labourism”

He is definitely on to something. Writing about Labour’s so-called ‘soft left’ he writes: “Despite the failures of both Kinnock and Miliband, their default assumption remains that progressive government can be achieved by selling moderate social democracy to the electorate, led by a guy in a smart suit.”

It is to this inspiring standard that the recycled fragments of the ultra-left now line up with the main vehicles of the Labour right-wing.

It is not possible to understand what is going on in the labour party in terms of a cultural conflict. While no one should underestimate the political potency of questions of nationhood, patriotism and identity how people see themselves, how they understand their place in the world and the possibilities that exist to change that world are intimately linked to their sense of agency.

Millions of people voted for Brexit and many thousands marched against it. If we try to both unite and differentiate these enormously heterogeneous categories on the basis of presumed cultural value we have a recipe for continued division.

If we try to both unite and differentiate on the basis of their shared and different class interests we have a real possibility of changing the world we share.

One thought on “New contours in Labour’s ideological topography”